Skip to content
Home » English » About time! Robert IGER, CEO of The Walt Disney Company, has announced a historic project for Disneyland Paris. The details and our analysis.

No it’s not an April fools (not this time). Yes, it’s great to be able to tell you about this. But no, contrary to what the general media and dodgy blogs are saying: this is not a project for three new Disneyland Paris parks. If you’re reading this, it’s because you’re looking for trustworthy information on the future of the Marne-La-Vallée parks, and we’re glad you’re here.

Robert Iger says it himself, he was wary of a huge project for Disneyland Paris that was considered as too risky. He changed his mind and made the announcement at the Elysée, after a meeting with French President Emmanuel Macron. It’s worth a mention that this is very unusual, such announcements are usually made during a D23 – convention organised for the official fan club. While we’re on the subject, we would love for Paris to host one of these events some day. But the story of Disney in France is linked to this agreement signed between the French government and The Walt Disney Company (TWDC), committing both parties to the development of this part of the region. The fans were taken by surprise as a D23 had just been held in Japan, and Disneyland Paris had proudly announced that the Rock’n Roller Coaster would be reorganised to welcome Iron Man and the Avengers.

Rock’n Roller Coaster will become an attraction with Iron Man and The Avengers.

The most interesting part of the announcement:

The new development will include a transformation of Walt Disney Studios Park, adding three new areas based on Marvel, Frozen and Star Wars, along with new attractions and live entertainment experiences.”

The press release was accompanied by this visual

Robert Iger was also interviewed by Le Figaro newspaper and posted a video on the Elysée social networks.

The areas mentioned are for example Fantasyland, Discoveryland, meaning that we’re talking about themed lands within the existing parks.

The triggering factor is undoubtedly the fact that Paris will organise the 2024 summer Olympics which will make all heads turn towards Paris and bring numerous visitors, but this is not the only factor. Politicians will say that the economic climate has changed, let’s hope that’s the case (in any case the development of Disneyland Paris has a direct impact on the economic and touristic appeal of the region). In truth, if you look at the particulars and follow the resort’s news in detail, you will know that TWDC has proceeded in stages through to taking control of the operating company which was not the case before with its multiple shareholders. The debt was also reduced enabling Disney to bypass the need for approval from multiple banks before launching a project (which was not the case for the Ratatouille zone). Finally, TWDC was most probably waiting for Catherine Powell (current President of Eurodisney) to prove to the parent company that Disneyland Paris could improve its results, and you can bet that there was movement within the company to achieve this.

But most importantly Disneyland Paris needed this: we know, because we visit the parks as a family so that we can tell you about them in our Revo-Ramas, all of the parks in France and around Europe generally invest in something new almost every year. And even if this competition is widely dispered, it draws away some potential visitors in the North with Efteling or Legoland, in the East with Europapark (which is going to open a water park, Rulantica), in the South with PortAventura, in France with Parc Astérix – which taps directly into the Ile-de-France region – and Futuroscope, not to mention the many others. There have even been announcements for new parks such as the Parc Spirou which should open this year. Other huge competitors in the project phase: Europacity (we’ll tell you about it soon), London Resort, and a Cinema themed park under consideration for Béziers supported by Studios Occitanie Méditerranée and Thinkverse. The fans will say that it’s not “Disney Quality” and yet they’re getting closer and closer to it, sometimes doing better still, and often with much smaller budgets. In Orlando, Walt Disney World had to move quickly to keep up with its neighbouring competitor Universal. This confrontation is visible, but probably benefits both parties: we did both parks ourselves in the same trip. However in Europe, this virtuous cycle is less obvious due to the distance between the parks. The figures for Disneyland Paris were worrying over the past few years, with a regular decrease in visitors while the other parks were beating their own records.

It’s no surprise to anyone that the announcement focuses on the Walt Disney Studios park, the park that is not yet a whole day’s experience and has a bad reputation, contrary to our Disneyland Park. This problem has to be sorted out before even thinking about a third park (still included in the agreement, we’ll come back to that another time), to achieve two objectives: renew the experience to encourage guests to make return visits, and make the experience bigger so that guests stay two, three days, maybe more if they check out the Villages Nature. This would fill the hotels and restaurants and give guests more time to shop. And, Robert Iger is the Disney President to whom we owe the purchase of Pixar, Marvel, Lucasfilm / Star Wars, and more recently, Fox entertainment. It’s no surprise that he wants to put money into sound investments, known to the kids, teenagers, parents and grandparents, trans-generational brands and heroes. Before he leaves, Robert Iger’s last challenge is to correct the errors made on the Disney theme parks by his predecessors.

New upcoming theme for the Hotel New York: The Art of Marvel

You’ve got the context; now let’s get back to the project. We know that the work schedule will span from 2020/2021 through 2025. We also know that there will be 2 billion euro involved (probably on top of the projects already underway – this would need to be confirmed). The concept-art, intentionally a bit out of focus, shows us what the park could look like with the Marvel, Star Wars and Frozen lands – as well as the unmentioned – Pixar Place. Out of focus to leave room for fantasy and conjecture (there are already over 30 pages on some forums with the usual prophets), while leaving a margin for regular communication and for perfecting the concept bit by bit. 2 billion is equivalent to 8 times the Ratatouille area (attraction + boutique + restaurant + square) which apparently cost 250 million euro at Walt Disney Imagineering rates (we couldn’t even imagine what a park like Efteling could do with such a sum). In other words, there is the wherewithal to transform the Walt Disney Studios, to make it into a full day park, and to keep back some surprises which are not on the concept-art, which is in fact only intended to illustrate the announcement. Who knows, there may also be some funds for the Disneyland Park, Disney Village and the hotels. We’re thinking in particular about the development of MagicBands to improve the flow and of the Fast Pass+. Ideally to limit costs, they could choose to duplicate the plans for other parks such as Marvel and Frozen in Hong Kong Disneyland, Star Wars Galaxy’s Edge at Disney’s Hollywood Studios (but also in Disneyland in California). 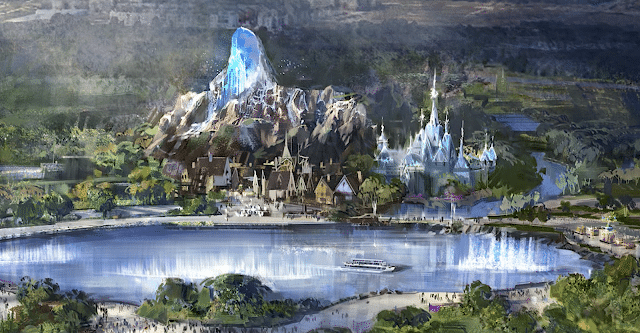 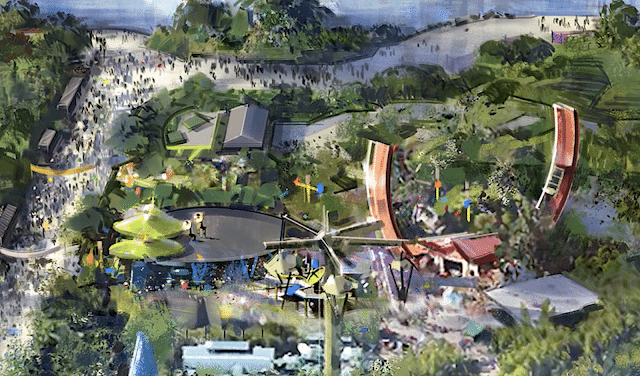 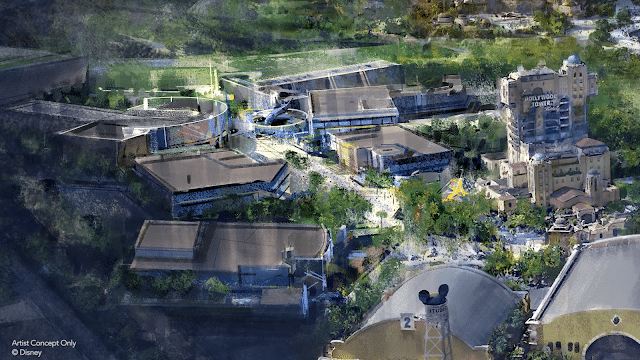 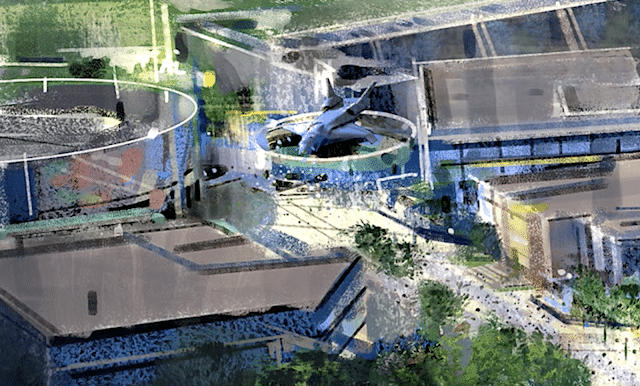 What we already know (we don’t know if these are included in the project as already announced previously):

The conjecture in relation to the announcement and to the concept-art (subject to changes, and undoubtedly intentionally evasive on certain elements) 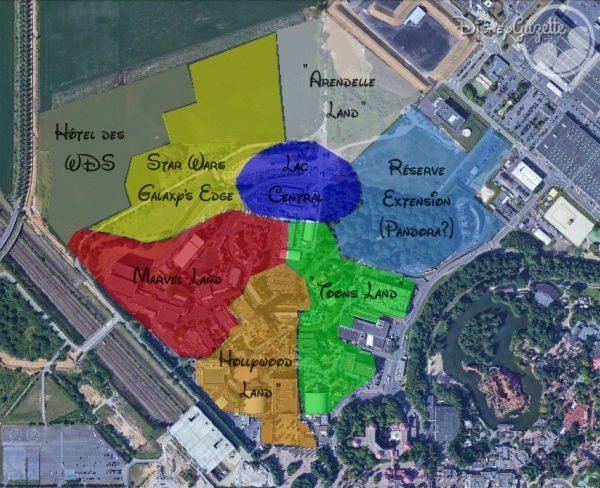 Attractions which should disappear: 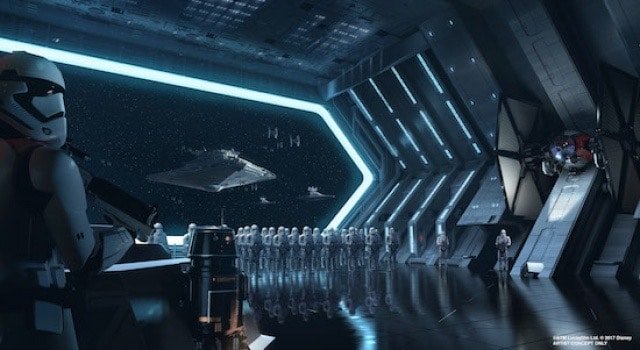 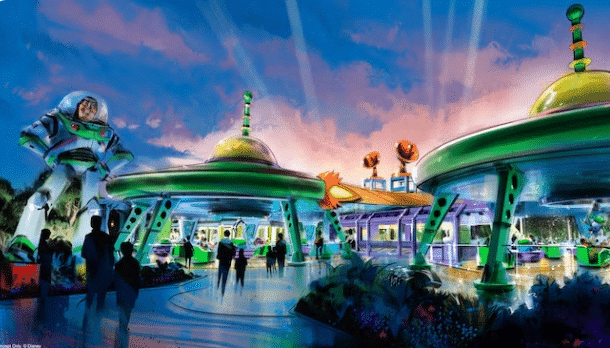 Disappointments (for the moment):

We regret (for the sake of consistency):

The third park is not on the cards for the moment according to Robert Iger, but it remains in the agreement. If this investment is a success and the park exceeds its 20 million guests/year, we could maybe hope for… 2030?

Either way, whether you’re a fan or not (because, remember, this is great news for the Ile-de-France region) you can only be pleased with this information, which should enable Paris – if it’s all implemented – to have one of the most attractive Disney resorts in the world. Competition will be tough (and that’s a good thing) with Walt Disney World and especially Tokyo Disney Resort, which I hope will be our next big destination in 2020. We’re looking forward to it, what about you? All we need is for Universal to announce that it’s coming to Europe and we’ll have nothing more to wish for. 🙂

So what do you think about this 2 billion euro project for the Disneyland Paris Walt Disney Studios?

Share the post "About time! Robert IGER, CEO of The Walt Disney Company, has announced a historic project for Disneyland Paris. The details and our analysis."