If you post videos on Youtube you are probably already familiar with this email “A claim for copyright infringement has been created for the content of this video …” And this, whether your video is 5 minutes old or has been there for a year, as in my case. 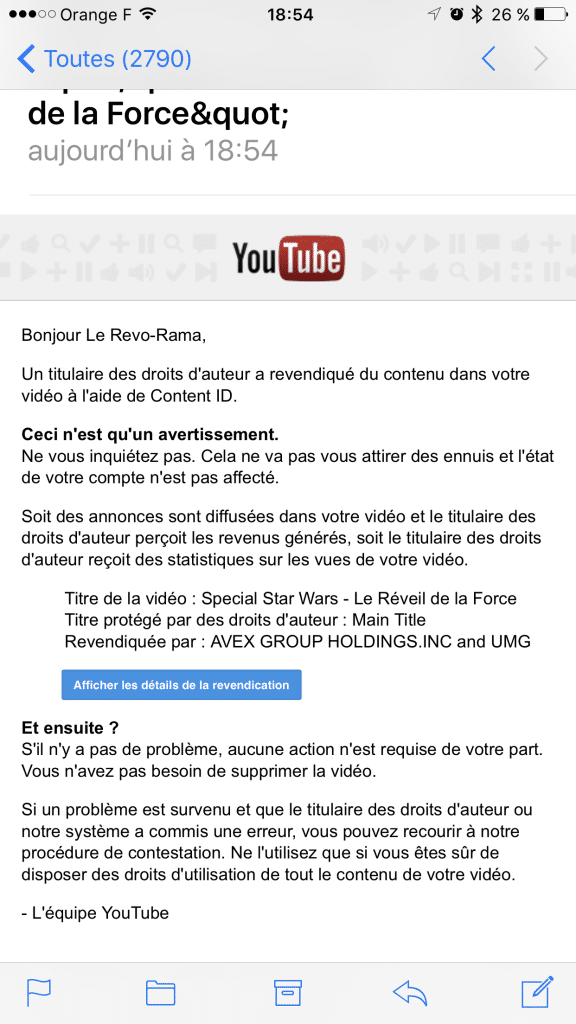 It is an automated Youtube system benefiting rights holders (record companies, studios and apparently artists too …). They provide the host site with the digital signatures of the works to be protected, and the Content ID system, which analyzes the content put online by the users on its platform, informs them when this signature is found in another video.

Unfortunately, I have never seen the system from the “right-holder” side, and can only imagine how it works for them. Sometimes the notification arrives very quickly, other times it may take over a year, as in my example. I assume that there are automatic instructions such as monetizing the video on their own account, blocking it in various ways (completely, on mobile, in some countries, or without sound), or inflicting what is called a “strike”. I’ve never had one, but it seems to be the worst of punishments because it can lead to banishment from the host site and the loss of your work (channel, videos). When the process takes longer, I imagine that it is handled manually or that the beneficiary has had a change of mind.

Why call it the RoboCopyright system?

The term comes from “La Quadrature” during the debate on ACTA. The video below parodies a famous scene from the movie Robocop (you can activate subtitles as needed).

But to get back to Youtube, it was perfectly summed up, with humor, in this video by Mozinor

I find this term quite appropriate in this case, because the robot in the quadrature video acts according to the artificial intelligence that has been implanted in it and this data is incorrect. And in Robocop, we have this duality between AI and the human soul. It’s not my favorite movie but you get the gist.

So am I a “pirate / hacker” if I get notification from RoboCopyright?

You know that I am convinced that artificial intelligence, along with big data and robotics, will continue to advance and revolutionize our society. We will not escape it and we will have to make choices before they are imposed on us. But today these technologies are still in their infancy and as such they pay for the errors of those who set them up (the GAFAs on the other side of the Atlantic).

First of all, I find it rather odd to see so many videos on Youtube that clearly violate copyright (music videos or songs, which are found on legal streaming platforms), while people of “good faith” will be flashed by Content ID. There are people who listen to all their music on Youtube, as you can find almost anything, no problem (including some elements that streaming platforms like Spotify or Apple Music struggle to propose … despite us requesting them for a while… but that’s another topic).

This SCINFOLEX article, which I invite you to read, discusses the case of the “Dancing Baby” video which used – because it was the song that was playing when the event occurred – a Prince song whose rights are protected by Universal. The author of the video won the case on the principle of Fair Use, a notion in American law:

This notion, which seems to me to be common sense, apparently, doesn’t exist in French law. Yet, should we not have the right to film an event with music in the background? Should we not be allowed to broadcast images of a movie trailer to discuss the film and review it? Have we no right to parody? And is it not in the interest of the so-called “right holders” to authorize the very Internet users / influencers (upon whom they call when they need them) to speak about their productions? It often happens that you could be solicited on the one hand and punished on the other hand by RoboCopyright.

I think they have understood this because in my case, while I receive these notifications very regularly either because of a song playing in a show I’m talking about or in a video game, most often the penalty is to impose publicity. I think it’s unfair, I’m discussing their releases, I spend days preparing the video, but the lowly profits go to multinational corporations that obviously don’t have the same budget constraints as I do.

And in the case of a video being blocked automatically or sanctioned, how can an automatic system have the right to do this? And how can it make this kind of distinction / appreciation? If the videographer is in good faith, is it not an arbitrary censorship?

Youtube seems to have improved its system by making it possible to challenge a claim, but oddly the process is in English (with US legal notions) and the on-line help warns you that if you make a mistake, the penalty could be worse. Suffice to say that you don’t change anything.

Disputes must be taken seriously and used only in cases where you have all the necessary rights to use the content in your video. Repeated or malicious abuse of the challenge process may result in sanctions against your video or channel. Source.

The details of the claim 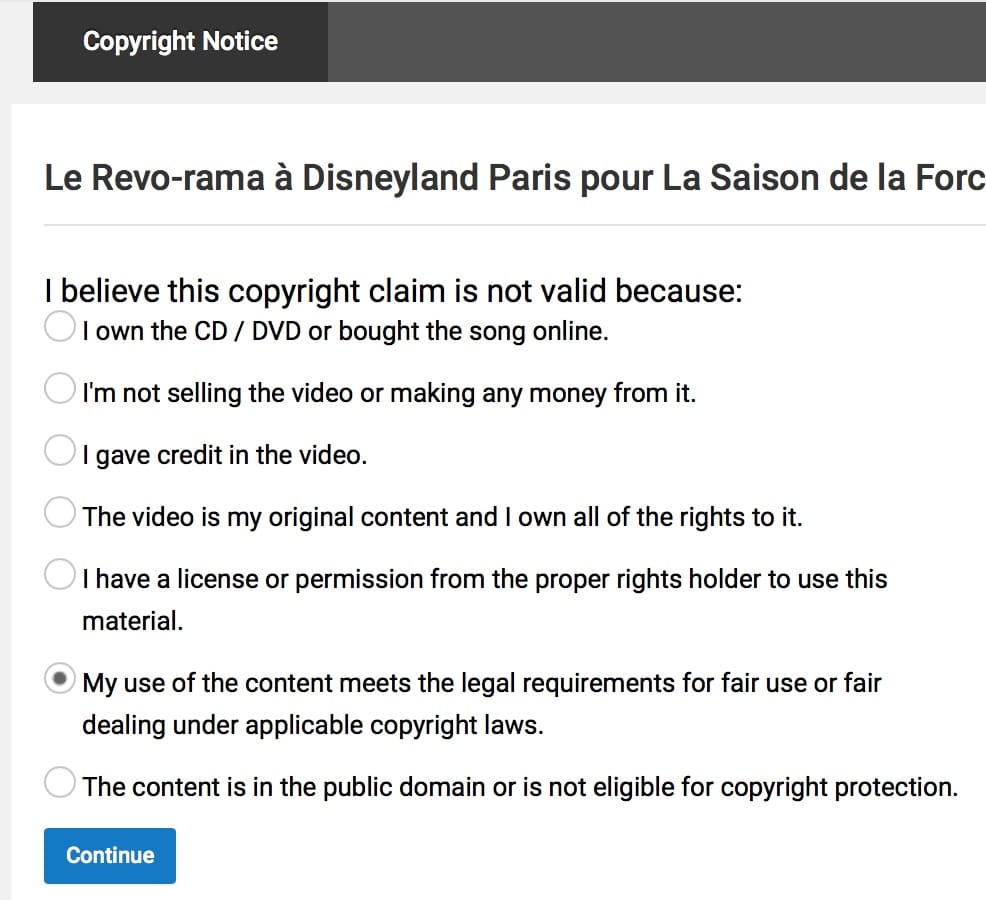 The protest form, in English

What’s the alternative to RoboCopyright?

Google offers copyright-free music, great idea, but can I put any old music on a Star Wars show that I’m talking about? No of course I can’t.

Some smart users advise you to make subtle changes to the original material. For example, reverse the video, slow down or accelerate the extract slightly… If I need to distort the video, no thanks. I also assume that the Youtube teams are smart enough to include these details in their algorithm.

Change host site? Youtube is a leader, it’s like saying we’re going to do without Google: impossible. Dailymotion is on the decline. Vimeo is an excellent platform but … Apparently all of them have opted for an equivalent system. So why change? Other than this problem Youtube is pretty damn good.

A few weeks ago Google announced an ambassadors’ program enabling its “heroes” to report illegal videos. For a start, this is not going to replace the RoboCopyright, and earning points by reporting others… there’s something not quite right about that (if I report something it’s because the content is serious and shocking, not because I want to earn points).

(“You too can earn points by killing creation and snitching on your favorite videographers!”)

In short … we’re stuck. One day I came up with the idea of setting up a bloggers’ union so that we could support each other and hold some weight with these stakeholders, but it seems that this kind of initiative is difficult to implement. Yet the creators supplying Youtube with content and audience should have as much weight as the rights-holders. I recently saw a video called “Support the web creators”, I contacted the author (NESblog / Speed Game), with no response, and I don’t think there have been any sequels.

To conclude it’s comical as Google is attacked for the use of the brand … Content ID.

What do you think about Content ID and RoboCopyright?

We use cookies on our website to give you the most relevant experience by remembering your preferences and repeat visits. By clicking “Accept All”, you consent to the use of ALL the cookies. However, you may visit "Cookie Settings" to provide a controlled consent.
Cookie SettingsAccept All
Manage consent

This website uses cookies to improve your experience while you navigate through the website. Out of these, the cookies that are categorized as necessary are stored on your browser as they are essential for the working of basic functionalities of the website. We also use third-party cookies that help us analyze and understand how you use this website. These cookies will be stored in your browser only with your consent. You also have the option to opt-out of these cookies. But opting out of some of these cookies may affect your browsing experience.
Necessary Always Enabled
Necessary cookies are absolutely essential for the website to function properly. This category only includes cookies that ensures basic functionalities and security features of the website. These cookies do not store any personal information.
Non-necessary
Any cookies that may not be particularly necessary for the website to function and is used specifically to collect user personal data via analytics, ads, other embedded contents are termed as non-necessary cookies. It is mandatory to procure user consent prior to running these cookies on your website.
SAVE & ACCEPT